Built in 1987, the Tiger Den is still considered one of the state’s top venues with a seating capacity of 4,720.

Through a partnership with Teachers Credit Union in the Fall of 2017, the Tiger Den is home to TCU Court!

TCU Court at the Tiger Den is home to boys and girls basketball, and volleyball, and Tiger Wrestling rolls out the mats on the floor for home events.  WCHS Athletics has served as the host site for a number of IHSAA sectionals, regionals and semi-state events through the years, and the facility is one regarded as one of Indiana’s finest.

Seating capacity at the Tiger Den has been reduced twice and increased once since construction, and all changes were completed to improve spectator and player safety.  In 2005, in order to move the front row further from the basketball playing surface (for player safety), an entire row was taken out of the lower level bleachers along both sidelines and behind each baseline, pulling the bleachers back away from the court and removing 162 total seats.  In 2014, an additional 32 seats were removed in order to place hand rails on the lower-level bleachers (spectator safety) along both sidelines.

An additional 16 seat locations were added with the construction of a handicapped seating area on the upper, west end of the Tiger Den in the summer of 2017.  This was completed in an effort to maintain a safe environment for players as well as for our spectators with limited mobility often seated in wheelchairs in the lower corners of the gym – locations where both safety and visibility was less than ideal.

There are two full-sized basketball courts upstairs in the Tiger Den located behind each of the upper-level retractable bleacher sets.

In 2006, a fitness center was added to the west side of the Tiger Den, and a wrestling room was added on top of the fitness center.  Both of these facilities can be accessed from inside the Tiger Den as well as through doors and stair wells located on the addition’s exterior.

The Tiger Den main court, which consists of a spring floor, was refinished and redesigned in both 2000 and 2013.  In all, there are 20 backboards and baskets in the Tiger Den, with 8 on the lower level and 6 on each of two upper levels.

For fans needing assistance in accessing a second floor, there is an elevator located in the northwest corner of the gym (door 26 entrance). 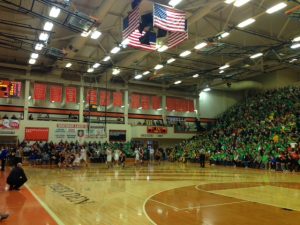 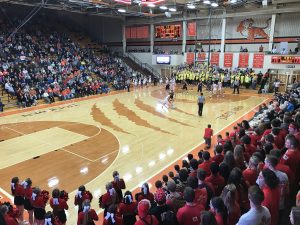 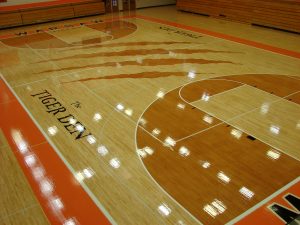 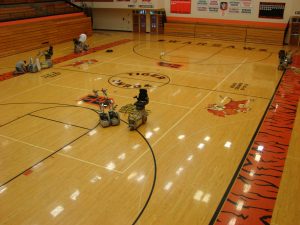