Former Tiger Track & Field and Cross Country star Robert Murphy is a step away from qualifying for the 2020 Olympics in Japan.

Murphy, now 25 years old, finished 13th among Americans in the U.S. Olympic marathon trials in Houston Sunday morning, covering the more-than 26- miles in 2 hours, 18 minutes and 58 seconds—two seconds under the standard required to be invited to the national finals.

“As Robert moved through our program, I felt as the race distance got longer Robert would get better,” commented Tiger Cross Country Coach Jim Mills. “He is a running machine, and a great representative of our program, Warsaw Community High School and the Warsaw community.”

Murphy will now compete in the U.S. Olympic Trials in Atlanta February 29, where three athletes will be selected to represent the United States in the marathon at the Tokyo games August 9. 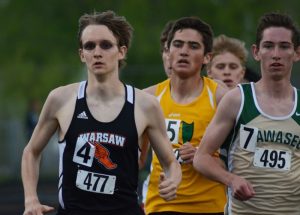